It's only fitting that the final match at Allianz Stadium pits its two main tenants against each other - the Sydney Roosters and South Sydney Rabbitohs with a place in the grand final on the line.

The oldest rivalry in rugby league will flare up again on Saturday night when the Roosters, who have played at the venue since its opening in 1988, and Rabbitohs, who called it home for its first two decades before switching to ANZ Stadium, play the last Telstra Premiership match at the ground before it is knocked downfor a new stadium to be built at the site.

While the Roosters are rested after earning direct entry to the preliminary final in the first week of the finals via their 21-12 win over Cronulla, they will be without star centre Latrell Mitchell due to a crusher tackle suspension from the win over the Sharks.

Front-rower Dylan Napa is still sidelined from his dangerous tackle ban for his hit on Brisbane hooker Andrew McCullough in round 24.

The Rabbitohs endured a gruelling win over the Dragons to reach the preliminary final stage but have no injury concerns for the clash with their long-term rivals.

Souths won 26-14 when these teams met in round six at Allianz Stadium before the Roosters squared the ledger with an 18-14 triumph over the Rabbitohs at ANZ Stadium in round 22.

This Saturday's match will pit Rabbitohs second-rower Angus Crichton up against the club he will join in 2019.

Key match-up: Adam Reynolds v Cooper Cronk. The rival halfbacks are the chief playmakers for each team and their kicking game in general play is crucial to their chances. Cronk kicked the Roosters repeatedly out of trouble in their win over the Sharks while Reynolds landed three field goals to lift the Bunnies to their 13-12 triumph over St George Illawarra in the semi-final.

For the Roosters to win: Their forwards need to muscle up against their bigger South Sydney rivals. With Napa still on the sidelines due to his suspension, the likes of Isaac Liu, Boyd Cordner, Jared Waerea-Hargreaves and Victor Radley need to shore up the middle of the ruck of the Rabbitohs' pack will dominate the yardage battle in the middle.

For the Rabbitohs to win: Damien Cook needs to pick his moments to scoot out of dummy-half. The NSW hooker has shown on several occasions this year he can be a match-winner when he gets a fast play-the-ball and sprints into space. Souths get success from so many of their attacking raids on the back of Cook's clever darts.

Roosters Stat Attack: The Roosters have won 16 of their past 20 finals games at Allianz Stadium. The NRL was on the front foot early when the finals schedule was set last week to say the match would be played at the venue despite the possibility of drawing a bigger crowd at ANZ Stadium. The home ground is a massive advantage to the Tricolours.

Rabbitohs Stat Attack: Souths skipper Greg Inglis is one try away from becoming the 12th player in premiership history to score 150 tries in his career.

And another thing: These teams have not met often in the playoffs - when the Rabbitohs beat the Roosters in 2014 to qualify for their ground-breaking grand final, it was the first time since 1938 that they had met in the post-season.

Roosters: Paul Momirovski is a late inclusion in the centres in just his second NRL game, with Mitchell Aubusson shifting to the pack, Victor Radley moving to the bench and Nat Butcher dropping out.

Rabbitohs: The Bunnies have made just one change to last week's winning team, with Tevita Tatola coming in for the injured Jason Clark.

Craig Wing's tip: I'm calling this one a draw. The Rabbitohs have a full strength team while the Roosters are missing Latrell Mitchell and Dylan Napa. Although the Roosters have had a week off, Souths were outstanding against Melbourne and tough against the Dragons and I think they'll get there by an Adam Reynolds field goal in extra time. Rabbitohs by 1. 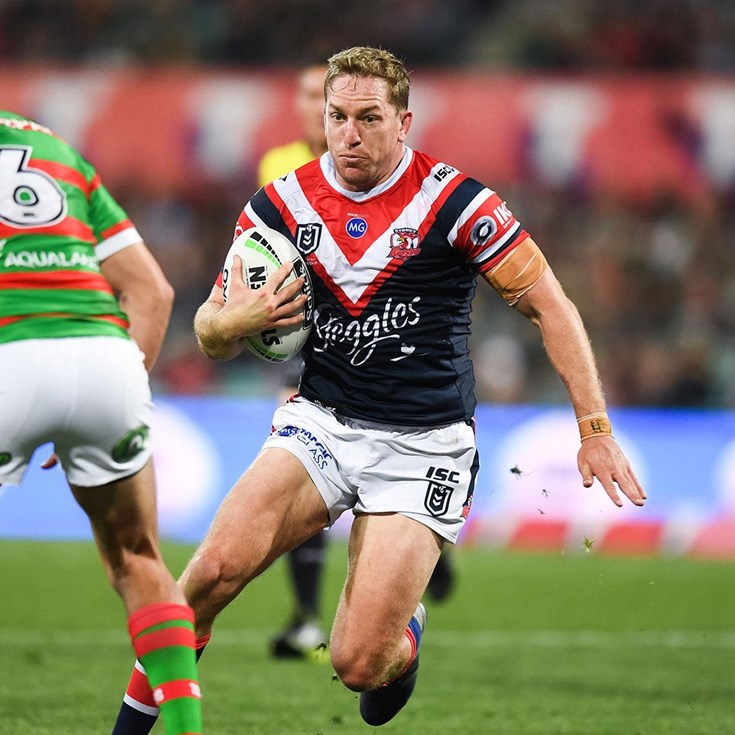 Offloads and flick passes gets Tedesco a try

All five Alex Johnston tries against the Roosters