With two wins from eight games, it's basically now or never as far as the Titans' top eight prospects are concerned.

Like most of their performances this season, last week they had more bad moments than good, crashing to a 28-14 road loss to the Cowboys.

Going by the form guide the Sharks should be too strong in the opening game of NRL's inaugural Magic Round.

But they've been a little hot and cold themselves from one week to the next and might not find it as easy to get up for the Titans as they did in last week's 20-18 upset of Melbourne.

Titans: A late change an hour before kick-off with Keegan Hipgrave dropping of the bench and his place taken by Jack Stockwell. Dale Copley returns on the wing for Phil Sami, while AJ Brimson starts at five-eighth for injured Tyrone Roberts. Jesse Arthars has been named on the bench for his NRL debut. Ryley Jacks and Brenko Lee dropped off the extended bench on Wednesday. Jai Whitbread was the last man omitted an hour before kick-off.

Sharks: Sione Katoa was dropped to the reserves, with Aaron Gray taking Katoa's spot on the left wing. Gray was moved from the right wing to allow Sosaia Feki to return at his preferred position. Billy Magoulias and William Kennedy were the players to drop out of the 19-man squad on Wednesday. Scott Sorensen and Katoa were omitted an hour before kick-off.

Titans props Shannon Boyd and Jarrod Wallace will have to bring their A-games against one of the NRL's most effective front-row pairings. Sharks duo Matt Prior and Andrew Fifita have been getting the job done on a consistent basis for years and will be looking forward to their showdown with Boyd and Wallace.

Frustration is building for Garth Brennan after another pedestrian performance. The Titans need to execute better in attack after completing just 65 per cent and committing 14 errors in last week's loss to the Cowboys. From a defensive standpoint they have to concentrate harder and be more vocal.

They aren't ranked among the Big Three but once again the Sharkies proved they are one of the few teams that are certainly capable of serving it up to the Roosters, Rabbitohs and Storm. Coach John Morris has to come up with the right words and game plan to avoid a potential let-down after such a determined effort in their 20-18 win over Melbourne.

For the Sharks, it is about backing up an enormous win with all those kids last weekend. Whatever John Morris said to them, he needs a repeat dose. The only thing to worry about is not slipping into thinking this NRL business is easy. For the Titans, Ash Taylor and Tyrone Roberts are good enough players to be assisting their side to 20 points each weekend. Sharks by 6

Sharks fullback Josh Dugan is still a dangerous player when he wants to be. Last week against Melbourne Dugan had 16 runs for a team-high 174m. Briton Nikora made a welcome return from a one-game suspension, scoring his third try of the season. Cronulla had 57% of possession against the Storm and completed a tidy 31/37 sets (84%).

What is it about the Storm that seems to bring the best out of the Sharks? Despite being without key players through injury, Cronulla defied the odds to overcome their 2016 grand final opponents 20-18. It was Melbourne's first road loss of the season and Cronulla's fifth win from their past six home games. The Sharks had averaged just 10 points per game in their previous 20 matches with Melbourne. 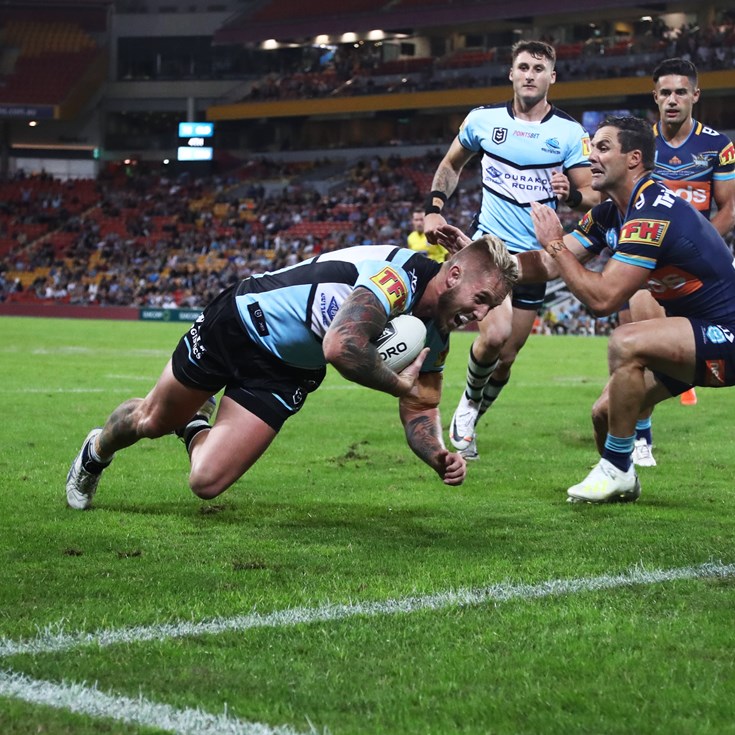 Sharks lose Fifita and Prior but dig deep to outlast Titans