A Kieran Foran masterclass has piled further misery onto the Gold Coast Titans, the Bulldogs fighting back from a 16-0 deficit to win 22-16 at Cbus Super Stadium.

Titans coach Garth Brennan labelled his team “dumb” and “mentally soft” for their second-half capitulation against the Sharks last week and yet again they were kept scoreless in the second half for a second straight week.

It’s the third time in four losses that the Titans have given up commanding leads having led the Wests Tigers 14-0 only to lose 30-14 in round seven and going down 26-18 to Cronulla to start Magic Round despite a 18-10 advantage at half-time.

Tries to Jayden Okunbor (60th minute) and Jack Cogger (69th) put Canterbury in front with 10 minutes left on the clock, the Titans twice denied runaway tries that could have levelled the scores in a pulsating finish.

The crowd of 10,105 were in hysterics when Titans prop Jarrod Wallace – who was enormous in a losing side – charged down a Foran kick and appeared to put Jesse Arthars away. But officials correctly ruled that he had knocked on in attempting to regather possession.

The Titans were gifted a second chance shortly thereafter but were again called back as Brian Kelly raced downfield, referees ruling a double knock-on following the error by Canterbury forward Danny Fualalo.

There was one final chance for the home side to send the game into golden point but their last set ended with Ash Taylor caught in possession on the last tackle with 45 seconds left to play, indicative of their recent end to games.

The Panthers may have relieved the Bulldogs of their position at the foot of the ladder overnight but Canterbury began the game as though they desperately wanted it back.

In between completing their first set and their second, the Dogs conceded five penalties and made four errors, the Titans using 79 per cent of possession and a perfect completion rate to race out to a 16-0 lead after just 17 minutes.

A short side exploration by Jai Arrow provided Kelly with the time and space he needed to put winger Dale Copley across for the 50th try of his NRL career in the fourth minute, his 51st coming seven minutes later in a similar left-side shift.

Both opportunities came courtesy of Kelly hits that forced the ball free from first Dylan Napa and then Will Hopoate. The shift to left centre seems to be helping Kelly bounce back after an ordinary game in defence a week ago.

Two Taylor penalty goals had the home side up and about but as has been the case all season, when the errors began, the points soon followed.

A cold drop by Titans fullback AJ Brimson gave Canterbury a rare look at the goal-line, Foran taking advantage with a bunted kick from close range for Marcelo Montoya to pick up millimetres from the turf.

Nick Meaney’s conversion made it a 10-point deficit and it was Foran again who created the chance to lessen it further, a cut-out pass on the back of a dominant defensive set sending Jayden Okunbor on a freewheeling 30-metre run from the left wing to under the posts.

After a sustained period of Titans attack to start the second half, the Bulldogs swung momentum when a pass from Taylor went to ground.

Okunbor and Montoya sparked a counter-attack that took the visitors into enemy territory. On the back of a penalty late in the tackle count Foran delivered another superb pass for Okunbor to score his second, Meaney’s conversion putting Canterbury ahead 18-16 with 18 minutes left to play.

Errors from both teams kept the game in the balance until a mistake by Kelly on the Titans 30-metre line put the Bulldogs on the attack, Cogger slicing between Kelly and Tyrone Roberts to score a simple try 11 minutes from full-time that would seal the Bulldogs’ third win of the year. 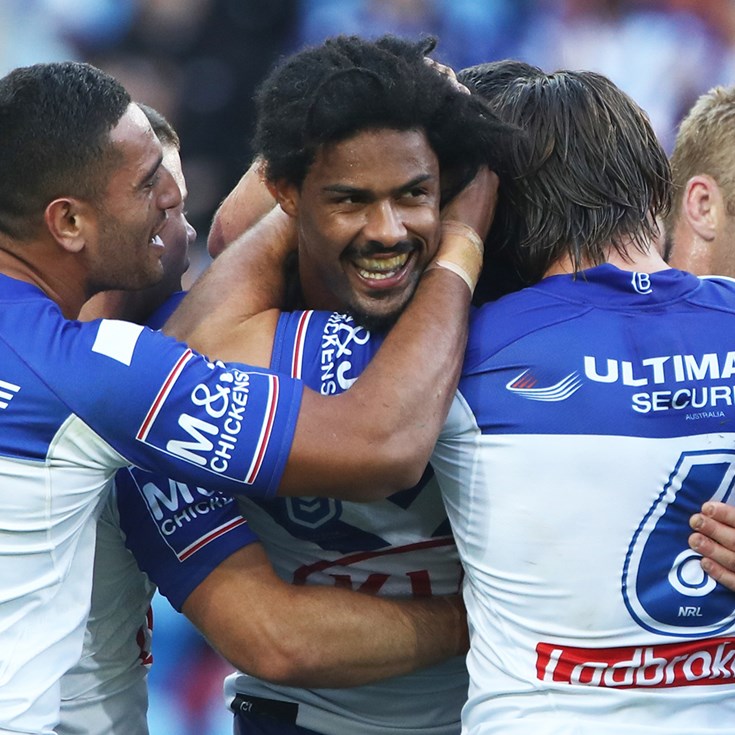 Titans v Bulldogs: Whitbread in for Boyd; CHN back on deck