As he prepares to become the first player to achieve the milestone of 400 premiership games, Melbourne Storm captain Cameron Smith has predicted that he won’t be the last.

While it has taken 112 seasons since the first premiership match between South Sydney and North Sydney at Birchgrove Oval in 1908 for anyone to play 400 matches, almost as many players have become members of the 300-game club in the four years since Smith hit the milestone as had done so before then.

Tigers hooker Robbie Farah is due to become the 39th player to achieve the feat in coming weeks and he will also be the 18th player to do so since Smith reached the 300-match mark in 2015, with the likes of Cooper Cronk, Paul Gallen, John Sutton and Darius Boyd being others who are still playing.

St George Illawarra prop James Graham is another example of longevity in the modern game and would be poised to reach the 400-game milestone later this season if the Englishman’s 225 appearances for St Helens were combined with his 172 NRL matches for Canterbury and the Dragons.

In a wide-ranging interview ahead of the historic milestone, Smith reflected on his 18-year career, the influence Storm mentor Craig Bellamy has had on him, nominated his best game and thanked the Melbourne medical and high-performance staff for enabling him to play so long.

Smith said the advancements in sports science and training methods would enable more players to reach the 400-game mark.

“I think someone will get it down the track,” Smith said of his record. “We are seeing more and more 300-gamers now than ever.

“Every season over the last four years we have seen someone get to 300 games so that really comes down to the amount of work that goes on away from the weekend’s game - your injury prevention work, your recovery and all the science behind your training programs now.

“I think it is solely down to that, it can’t be down to anything else. The game has got faster, it is more physical than ever, there are bigger bodies playing the game and the collisions are much more forceful but more guys are churning out 200 and 300 games.”

Smith’s nickname is "The Accountant" because he doesn’t look like a player who spends hours in the gym each week but the recently-turned 36-year-old has missed few games through injury.

He has also had few full pre-seasons with the Storm due to his representative commitments with the Kangaroos, for whom he played 56 Tests.

“I’d like to think that has played a big part of it, that I have been physically prepared and mentally prepared for each game I have played.

"I really pride myself on being out on the paddock and working hard and making my body resilient and being resilient mentally as well.”

Smith is an example for other players, on and off the field. Yet remarkably it took time for Bellamy to be convinced that he was captaincy material and until the 2007 finals series he shared the role between a five-man leadership group that included Cronk, Dallas Johnson, Michael Crocker and Matt Geyer.

“I must admit early on I wasn’t the most professional as far as sleeping habits and eating habits,” Smith said.

“I was a little bit carefree with those things. I was lucky to have some natural ability and I just continued from the way I played my football in my juniors to the first few years of my NRL career.

“Everyone sees the 80 minutes you play on the weekend but they don’t see all the work that goes into getting you to your optimum on the weekend.”

Smith recalls his first game for the Storm in round five of the 2002 competition, when he was chosen as an 18-year-old halfback against Canterbury.

Melbourne lost 22-6 against a Bulldogs team who dominated the competition before having 38 points stripped on the eve of the finals for rorting the salary cap.

“They were by far the best team in the competition, they were obviously really well coached and they had a lot of smart footballers in that team,” Smith said.

“I think I finished the game with 34 tackles playing at halfback and I reckon I tackled Steve Price 15 times. He picked me out pretty early.

“Mark Murray was our coach at the time and his message was pretty simple, ‘in defence just make your tackles and with the ball if you see the opportunity have a run. Other than that listen to Scott Hill and if he wants the ball give it to him’.

“That’s the way I have played my entire career, I haven’t tried to complicate things. We ended up losing quite convincingly but your debut game is always one you remember. There is obviously plenty that has gone on between that game and this game.”

Smith has played 398 games for the Storm since so choosing a favourite may be tough but he has no hesitation in nominating the 2008 semi-final in which Greg Inglis scored a last-minute try to secure a 16-14 defeat of Brisbane at Suncorp Stadium.

It was also the match from which Smith was charged over a crusher tackle and suspended from the grand final against Manly.

“Obviously grand finals I have played and the premierships I have won are top of the tree but that game for me always stands out when someone asks what is the greatest club game you have played in,” Smith said.

“It was the whole thing of being at Suncorp and playing against the Broncos. Craig is always at his best during those weeks when we are playing the Broncos, he is frothing at the mouth when we play them.

“It was to-and-fro and they were home and hosed late in the match but somehow we found a miracle through Sika Manu who popped the ball out through Ashton Sims and two plays later Greg Inglis was putting the ball down with four seconds left on the clock to break their hearts.”

Smith has been on the verge of joining the Titans and the Broncos at various stages of his career but he insists it was only because he wanted to move closer to his family in Queensland.

However, the pull of the Storm always convinced him to stay and he is proud to be a one-club player.

“I never really saw myself as a player who was going to play for another club.”

Smith has become a big name in Melbourne sporting circles and the celebrations for his milestone will include meeting with the only four AFL players to have played 400 games – North Melbourne’s Brent Harvey (432), Hawthorn’s Michael Tuck (426), Richmond’s Kevin Bartlett (403) and Essendon’s Dustin Fletcher (400).

“That is pretty cool to be in a state with those four guys who have achieved that great milestone and I get to join their club now as a 400-game player,” Smith said. 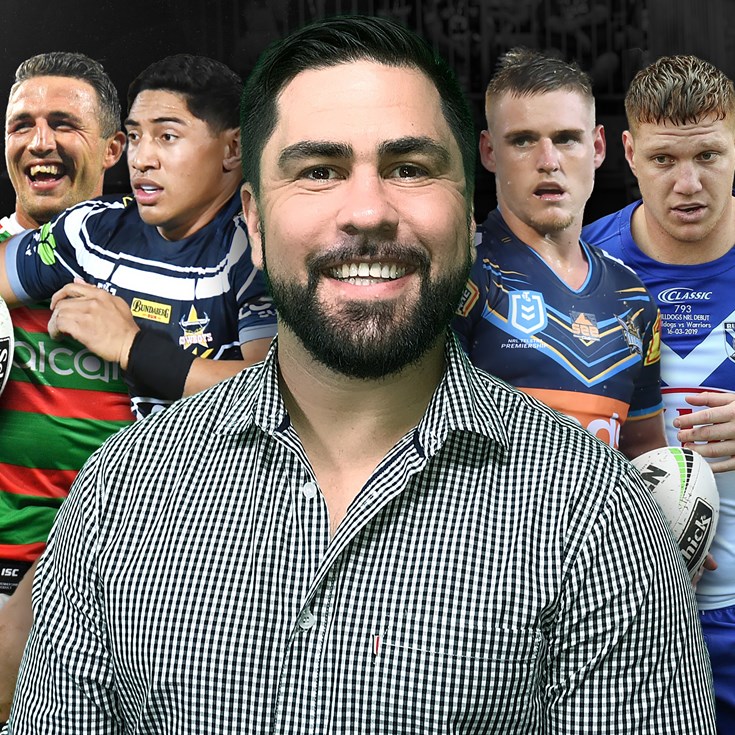