The Dragons are dead in the water after a 40-18 pummelling from Penrith led by a double from pint-sized flyer Brian To'o on Friday night.

The Panthers' seven-tries-to-three drubbing buried a Red V roster worthy of a top-four finish in lowly 14th place with seven games left in the regular season.

Only twice in 11 attempts have the Dragons won since Anzac Day.

And despite working to a surprise 12-10 lead before halftime, St George Illawarra's second-half capitulation will have the dogs at Paul McGregor's door once more, particularly after million-dollar half Ben Hunt was kept on ice due to his Origin workload.

Ivan Cleary's outfit meanwhile are now one win outside the top four themselves, just two months after sitting equal last.

To'o was the story and the smiling assassin for the victors, having been told repeatedly as a junior that he was too small to survive in the league's land of giants.

Measuring all of 174 centimetres on the right wing, To'o stood tallest in a see-sawing first half with two scintillating tries that the Panthers then turned into a seventh win on the trot.

Aerial acrobatics produced his first after seven minutes, the 20-year-old flying on to a deft James Maloney chip, continuing the veteran half's Midas touch which would produce three try assists for the evening.

Maloney was on the money again when Nathan Cleary threaded a grubber through, only to be checked off the ball by Tyson Frizell as he pursued another four-pointer.

Soon enough though Penrith were putting the boot in again.

Three sets on without having left the Dragons' 20-metre zone, rookie rake Mitch Kenny dinked a grubber through from dummy-half with Brent Naden capitalising in the 19th minute.

Just as the Red V looked to be on the rack, Luciano Leilua loomed as an unlikely 116-kilo halfback hero.

Ravalawa gets the Dragons on the board

As replacement for ring-in No.7 Darren Nicholls while he underwent a HIA, Leilua drifted down the Dragons' right edge and created an overlap to have Mikaele Ravalawa over in the corner.

The visitors continued to press, but handling errors and obstruction penalties had all the hallmarks of a down-and-out side trying to turn the tide.

When they finally did, Leilua was again in the thick of it.

Cameron McInnes found space around a tired Panthers' ruck and Leilua in support, with Dufty then taking the Dragons well down field.

A surprise two-point lead came with Josh Kerr's maiden NRL try off the next play.

It lasted all of three minutes until To'o struck again.

Shooting through the Dragons' middle and making Corey Norman look all sorts of average, To'o strode away for his second try of the night and another four-point advantage.

When Jonus Pearson coughed up possession two minutes into the second half, with Moses Leota dotting down a couple of tackles later, the Dragons were done.

Maloney and Cleary made sure of it in the 53rd minute, the latter scoring from the former's grubber for 28-12.

Kikau sin-binned for shot on Nicholls

A second try to Naden, followed by Reagan Campbell-Gillard strolling through, blew out the scoreline further making Paul Vaughan's 68th minute return of serve too little too late.

In between Viliame Kikau was sin-binned and put on report for a late shot on Matt Dufty.

With the Rabbitohs and Eels looming in the next two weeks, the hits could well keep coming for the beleaguered Dragons. 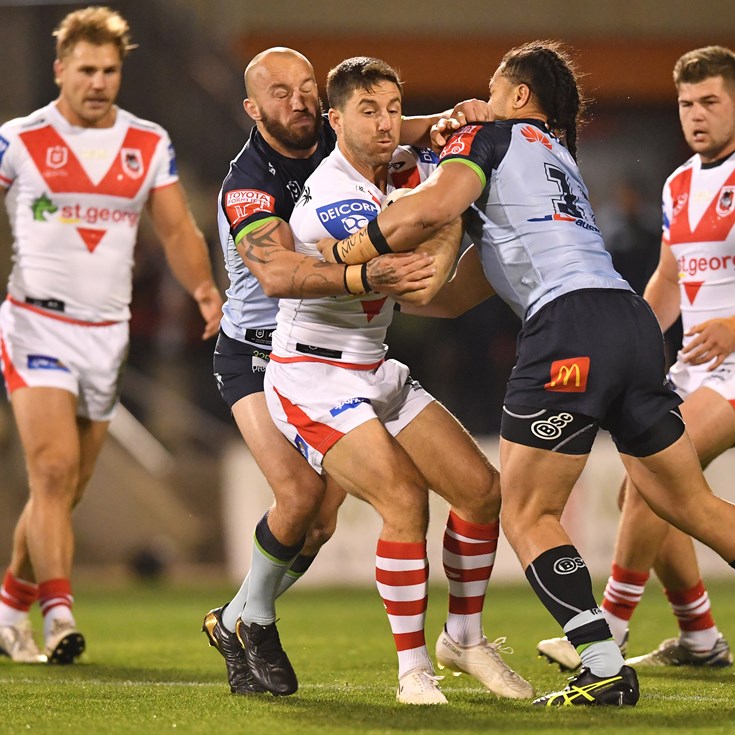 Gone with the wind: Dragons harness gale to run down Raiders

'We were in control': Averillo stars in Bulldogs blitz