Few footy followers would've expected Manly to be so high on the ladder after 18 rounds, but coach Des Hasler has transformed this team and shaped it into a formidable force.

The Sea Eagles have been the biggest surprise packet by far in 2019 and they aren't done yet if last week's demolition of Parramatta is any indication.

They have a dead-set star on the rise in Rueben Garrick, while Tom Trbojevic is playing as well as anyone in the competition.

In the blue corner are the Storm, who appear certain to claim another minor premiership and are perfectly placed to progress to a fourth successive grand final.

Storm: No late changes for Melbourne. Tom Eisenhuth and Tino Fa'asuamaleaui dropped off the reserves list 24 hours before kick-off, and Tui Kamikamica and Marion Seve were cut on game day. The Storm have won four of their past five games against the Sea Eagles.

Sea Eagles: Steady as she goes for Des Hasler with the same team that ran riot against the Eels lining up again for the heavyweight clash with the Storm. Jack Gosiewski and Lloyd Perrett were trimmed from the extended bench on Friday night, with Cade Cust and Brendan Elliot dropping out on game day.

They were team-mates for Queensland in the Origin series but playmakers Cameron Munster and Daly Cherry-Evans will be up against each other on Saturday night. Munster will be fresh and ready for action after being rested for last week's win over the Titans, while DCE is playing like a man who senses his team can go a long way.

Munster will be looking to provide his usual sting in attack, especially if the game is on the line in the closing stages. Craig Bellamy also welcomes back Felise Kaufusi, Will Chambers, Josh Addo-Carr and Christian Welch so he has no shortage of class and experience. Melbourne will be aiming to take away Manly's attacking flair, while Cam Smith's impeccable game management in the final 15 minutes will be a key factor.

If the Sea Eagles have serious title aspirations they surely must be relishing the chance to take on methodical Melbourne in enemy territory. They are in good form and it's obvious that Des Hasler has them believing in the process. The Sea Eagles need to play their own game on Saturday and stay patient if the points don't come early. If they can keep it close they have the match-winners to steal the Storm's thunder.

There have been some brutal battles between these sides over the last two years. Des has his side absolutely flying. I’m looking forward to the forward battle. Martin Taupau and Addin Fonua-Blake are probably the best front-row combination going around at the moment but I expect Jesse Bromwich and Nelson Asofa-Solomona might want to make a statement in this game. Storm by 1

Melbourne are setting the pace at the top of the Telstra Premiership ladder and also lead the way in no less than nine key statistical categories, including set completion (80%), possession (49%), run metres (28,097) and line breaks (78).

Are we headed for the third grand final showdown between Melbourne and Manly in 13 years? The Roosters, Rabbitiohs and Raiders might have something to say about that but the Sea Eagles are the real deal. The Storm claimed a 34-8 win over Manly in the 2007 premiership decider before the Sea Eagles exacted revenge a year later with a 40-0 rout. Manly have played in two grand finals since then, while Melbourne have appeared in five. 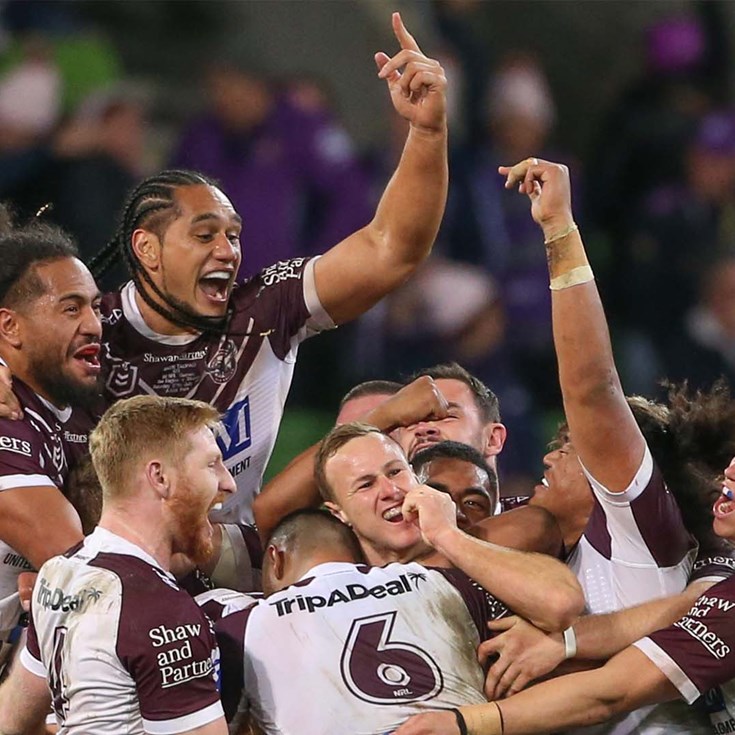 Chambers scores off his own kick