The Roosters were starting to look unbeatable before last week's final-round loss to the Rabbitohs - their second loss of the year to their arch-rivals.

Coach Trent Robinson might not be able to name his strongest side but the premiers have covered gaps well with minimal fuss all season.

It was a only a few weeks ago that the Rabbitohs looked like they had nothing left in the tank. But Wayne Bennett worked his magic and they won their final three games and will head into the rematch with their greatest rivals on a high after sending the Roosters crashing back to earth last week.

The Roosters and the Rabbitohs have played in 11 finals matches with Souths holding a 6-5 edge but nine of those games were played before World War II.

Roosters: No changes with the team to run out 1-17. Cooper Cronk dismissed concerns about a shoulder/neck injury. Angus Crichton was bumped to the bench when the teams were announced on Tuesday with Mitch Aubusson returning to the back row. Siosiua Taukeiaho (ribs) and Brett Morris (calf) will play. Sitili Tupouniua and Drew Hutchison dropped out of the reserves list on Thursday night. Lindsay Collins and Ryan Hall were omitted an hour before kick-off. The Roosters will play their 300th game at the Sydney Cricket Ground.

Rabbitohs: Liam Knight, Junior Tatola and John Sutton have all passed concussion protocols and will take their places. George Burgess has been elevated to start at prop after his nine-week suspension. Junior Tatola drops to the bench and Dean Britt has been omitted along with Bayley Sironen. Connor Tracey and Mawene Hiroti dropped off the extended bench 24 hours before kick-off. The Rabbitohs have won seven of their past eight games at the SCG.

Intriguing head-to-head clashes all over the park but it's hard to go past Luke Keary v Cody Walker. Some Roosters fans reckon last week's loss to the Bunnies was no surprise because Keary didn't play. James Tedesco, Latrell Mitchell and Cooper Cronk are crucial to the Chooks' success, but Keary is the X-factor. Walker, meanwhile, has caught fire in recent weeks after being mired in a post-Origin slump following his red-hot start to the season.

The return of Keary - he missed last week to witness the birth of his first child - not only eases Cronk's workload, it adds an important dimension to their attack. Put simply, when Keary is on, the Roosters are on. Tedesco and Mitchell love the bright lights of finals footy, while Angus Crichton will be out to make a lasting impression in his first finals game in Roosters colours.

Damien Cook, who tops the league for line-break assists and dummy-half runs and is top five in tackles made, must continue his recovery from a post-Origin slump of his own. The loss of Sam Burgess to suspension leaves them short of arguably their best big-game player, which means Cook, Walker and Adam Reynolds have a lot of responsibility on their shoulders to steer the Bunnies around.

Luke Keary returning is huge and I think the Roosters win this game. Last week's battle was unbelievable for a game that meant nothing - the most brutal game of 2019 - and being a semi this week they'll take it to a higher level. The Roosters are the second-best defensive team in the competition and only a few points behind Melbourne in attack. They had the potential to lead by 20 at half-time last week and I see them making a massive statement on Friday. They'll show us how great they are and that they're the team to beat in 2019. Roosters by 10

Latrell Mitchell easily claimed the NRL scoring crown for 2019 with 251 points while also finishing equal-second in tries (18). Tedesco topped the league in line breaks (22) and tackle breaks (148). The Roosters were the highest-scoring team after 25 rounds (627 points) and scored the most tries (108).

John Sutton is the first to admit he doesn't move as quickly as he used to, but the Rabbitohs veteran has a vital role to play in his team's finals campaign, especially with the Burgess brothers not as dependable as they once were. At 34 and with 333 games under his belt, Sutton debuted with Souths in 2004 and has never played for another club. Putting it in greater perspective, "Sutto" has played more games for the Bunnies than any other player in the club's proud 111-year existence. 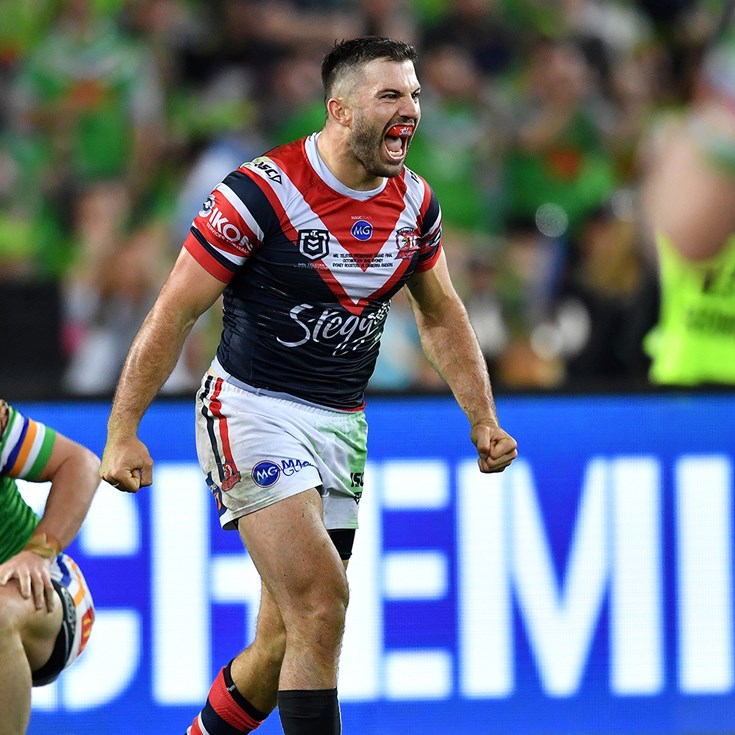