Dominant displays from Shaun Johnson, Chad Townsend and Matt Moylan have lifted the Sharks to their third win in four games – a 40-22 victory over old rivals Manly.

Cronulla hit their stride late in the first half at Central Coast Stadium and led 18-6 at the break.

Manly coach Des Hasler refused to use that as an excuse.

"It's seven days ago. Seven days to turn around and come here and compete again," a disappointed Hasler said.

"They were better at the ruck than us, they rolled us down the field and defensively we missed far too many tackles.

"We need to fix that pretty quick smart. I just thought our intent could've been a lot better than what it was."

Townsend enjoyed arguably his best match of the season, setting up three tries, while Johnson created another two to take his try assist tally to 10 – the most in the Telstra Premiership. Fullback Moylan was also classy in laying on two four-pointers.

Hooker Blayke Brailey was dangerous on the back of quick play-the-balls, benefitting from the likes of Braden Hamlin-Uele, Andrew Fifita and Siosifa Talakai's grunt work.

And Sione Katoa followed up his first career hat-trick last round with a double including another airborne finish.

Brendan Elliot was named to replace Trbojevic at fullback but he ended at centre, with Reuben Garrick assuming the Manly custodian role and Tevita Funa pushing to the wing.

Hasler said he made the decision because Elliot played well at centre against the Raiders and Garrick boasts blinding speed.

"I only found out pretty close to the game [that I'd be playing centre]," Elliot said.

He added: "I can't exactly pinpoint [what went wrong for the team]. It was a brutal game last week but we've had a lot of time to recover. Just from the get-go it probably wasn't good enough."

Manly had won their past five matches in Gosford and had defeated Cronulla in 11 of their 12 previous meetings. That mattered little to the Sharks on this occasion.

The dynamic Hamlin-Uele, who had been elevated into the starting front-row ahead of Fifita, drew first blood 15 minutes into the contest.

After the Sharks stretched Manly with some probing shifts, Hamlin-Uele burst through from close range thanks to halfback Townsend's perfect flat pass.

The Sea Eagles did themselves no favours by sending the ensuing kick-off over the dead-ball line.

Given repeat sets in enemy territory after a Bryson Goodwin error, Jorge Taufua crossed in the corner to hit back for Manly. Five-eighth Lachlan Croker found Brad Parker with a lovely cut-out pass, with the centre cutting inside the rushing defence before serving to the unmarked winger.

The boys in black, white and blue landed a big blow two minutes from half-time. Brailey linked with Moylan, who cut back, drifted sideways and delivered a wonderful ball for Jesse Ramien running a hard, straight line to earn four points.

The Sharks kept the momentum going to open the second stanza as Townsend rolled a neat kick into the in-goal and centre Josh Dugan won the race.

Goodwin was next to get on the scoresheet, bagging his second try in two games since rejoining his junior club. A Johnson cut-out pass gave the veteran winger space to move.

Katoa added to his incredible highlight reel with a leaping put-down in the 53rd minute after Townsend scooped the Steeden off the ground.

The Sea Eagles closed the gap slightly when Jake Trbojevic busted the line and sent Addin Fonua-Blake over, but it was no more than a consolation.

Brailey was on the spot to ground a deflected Moylan kick for his first try of 2020, extinguishing Manly's last hopes of a miracle comeback.

Vision and execution on point from Johnson

Fonua-Blake crashed over for his second following a brilliant Curtis Sironen offload, before Tevita Funa scored a stunner at the death to bring Sea Eagles fans some solace.

The Sharks claimed the Steve Rogers Memorial Trophy for their efforts.

"It means a lot. [Rogers] is an absolute icon of our club and too many times that cup's gone back to Manly," Cronulla coach John Morris said.

"It was really nice to sing the [team] song in there and share a little moment thinking about Steve Rogers and what he meant to the Cronulla Sharks."

Dugan was taken off after 66 minutes, but Townsend said that was merely precautionary because the centre had a "tight calf". 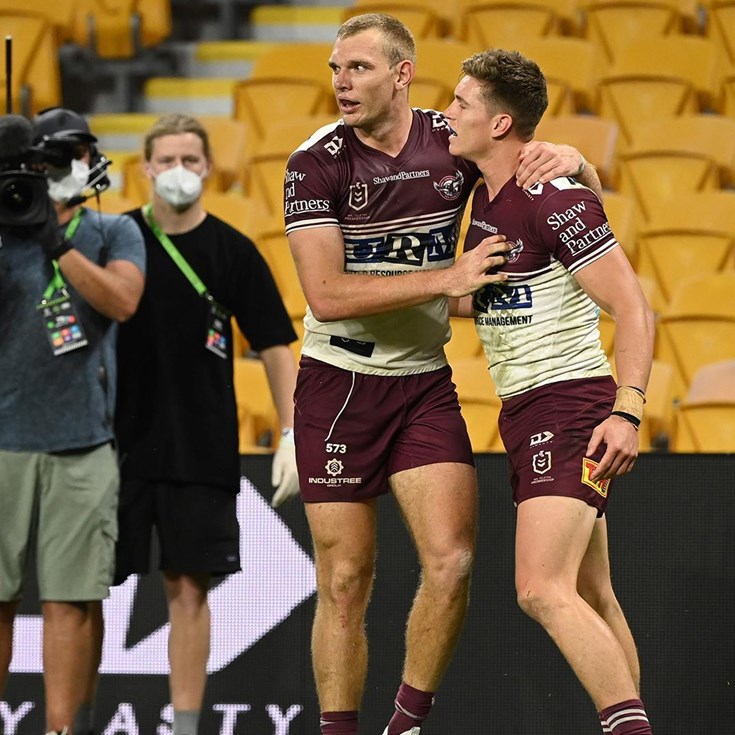