Ricky Stuart launched a water bottle from the coach's box when Jack Wighton was sin-binned against the Warriors and then followed up with a spray for the refs despite Canberra's 26-14 win.

The Raiders overcame the early loss of halfback George Williams to a head knock to recover from a 14-6 deficit, with Elliott Whitehead starring as a makeshift five-eighth and winger Semi Valemei scoring a double, but Stuart branded it "a shocking game".

Warriors captain Roger Tuivasa-Sheck's season is done after he suffered a hamstring injury, while Raiders enforcer John Bateman is confident he won't be sidelined with an elbow issue.

Stuart's side need to beat Cronulla in the final round and hope Parramatta lose to Wests Tigers to jump into fourth spot and avoid being in sudden-death play in week one of the finals.

"If we had have put some lineouts in when the ball went out, we would've had two rugby union games here in two days," Stuart quipped in reference to the contest's stop-start nature.

He felt a 7-1 penalty count against his team in the first half was unfair and claimed referee Chris Sutton made a 28th-minute "error" by sin-binning Wighton for being offside.

"I don't think it went both ways in regards to what we were getting penalised for," Stuart said.

"Jack Wighton's sin bin – would it have been the same decision if it was a semi-final? I hope not, because he wasn't offside. You can't make that error.

"I just spoke to the kid down there. He said, 'I do that every week, I know the timing and the judgement. That's my job'."

Asked whether Canberra should've been able to use a captain's challenge on the Wighton incident, Stuart replied: "That's a question for [NRL head of football] Graham Annesley.

"Thank God COVID's in [causing crowd restrictions], because we won't get any more than 6000 [people] to these games.

"I won't be raising any points [with Annesley]. I'll be doing my review, they'll be doing their review, go into hiding with their results and it'll just be game on again next week."

Usual second-rower Whitehead set up a terrific try for Hudson Young in a play where he kicked twice and later took a long-range intercept as he stepped into a playmaking role alongside Wighton.

Stuart praised the Englishman's utility value and reiterated his belief that he is "the most underestimated player" in the NRL.

The Warriors scored first through centre Peta Hiku in the 10th minute thanks to a smart grubber from five-eighth Kodi Nikorima.

But Hiku's opposite three-quarter Jarrod Croker charged onto a flat Wighton pass and overpowered Tuivasa-Sheck to hit back.

Croker went for a HIA after touching down as two quick penalty goals from Chanel Harris-Tavita restored the Warriors' lead.

And Nikorima took full advantage of Wighton being sin-binned when he targeted his depleted edge to send Hiku across for his double.

The Raiders desperately needed some luck and they got it as Valemei scooped up a loose offload and dashed 90 metres to score.

Whitehead made sure Canberra led at the break when he put in a grubber for himself and then kicked in-field for Young, who did wonderfully well to gather the Steeden cleanly and score.

Valemei steamrolls his way to a double

Todd Payten's team enjoyed a sustained period of attack to begin the second 40 minutes, but they failed to produce points as Whitehead plucked a pass and set off down the field.

The Englishman was tackled, but the ball was soon shifted left where Croker found Valemei who powered in for another try.

Jack Murchie was reported for a dangerous tackle that led Valemei to leave the field for a HIA in the 70th minute before Nick Cotric finished off a lovely try to seal Canberra's victory. 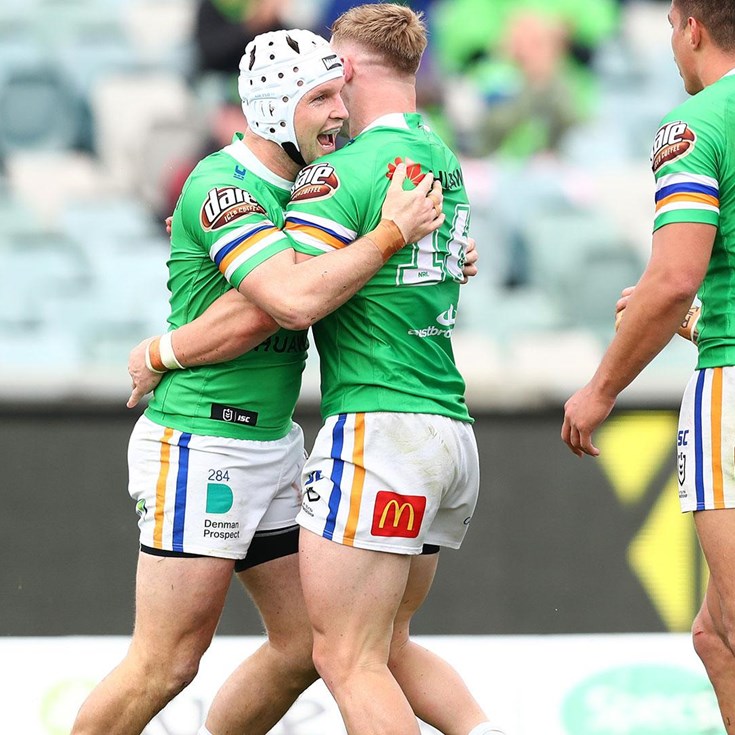