St George Illawarra fullback Matt Dufty apologised to his parents for breaching the NSW public health order and the NRL’s biosecurity protocols after they expressed concerns that he had put his career in jeopardy.

Dufty, who was one of 13 Dragons players who defied a club directive by attending a gathering at Paul Vaughan’s house, admitted it had been difficult to watch last weekend’s loss to Manly while serving a suspension for the breach.

However, the people that Dufty felt he had most let down were his parents, who feared for his future after being told by coach Anthony Griffin earlier this season that he would not be offered a new contract.

The 25-year-old speedster has since signed a one-year deal with Canterbury but in the wake of Vaughan’s sacking and the issuing of fines totalling $305,000, Dufty’s parents told him they were worried about where he would play next season.

“My mum and dad were very disappointed in my decision, which I was as well,” Dufty said ahead of Sunday’s match against the Titans on the Gold Coast.

“Mum and dad raised me to be better than that and I hadn’t signed anywhere at the time. They were more upset with me putting my future at risk and letting everyone down, and kind of embarrassing everyone they know as well.

“Kids are a reflection of their parents and obviously I had to apologise to my mum and dad, but they know that is not me. I let a lot of people down and mum and dad are just a few of them.”

Having served his suspension along with forwards Tyrell Fuimaono and Kaide Ellis last week, Dufty said he now wants to make amends for his parents, as well as Griffin and the St George Illawarra players, fans and sponsors.

“It is hard for my parents at the moment too, because I haven’t seen them in a few weeks and obviously they would rather see me,” he said.

“Mum was worried about my welfare, as well. She calls me every day now. It is starting to get a bit annoying, but it is just because she loves me.”

After being told that he was unwanted by the Dragons, Dufty admits that he did struggle with the uncertainty over his future but a phone call from Bulldogs coach Trent Barrett eased his concerns.

Dufty said the move was finalised within three days and he was now focused on helping the Dragons hang on to their position in the top eight to secure a finals berth.

“The last few months have been a bit up and down with my mental state,” Dufty said. “It has affected me a little bit but there is a massive weight off my shoulders now and I just want to finish my time at the Dragons on a high.

“They have given me so much since I was a 13-year-old kid. I feel like I owe it to everyone, not just the coaches and the players, but to the fans and my family to put my best foot forward and finish strong.

“Last week was very disappointing for me personally. Sitting on the bench was one of the hardest games I have had to sit out of and watch because we had a pretty disrupted week with everything that went on and moving to Queensland.

“Obviously the loss on the weekend really hurt but we've still got a shot at the finals, we are still in the eight, and once everyone returns from suspension we can just focus on playing footy.

“I think if we can win a few of these games in the next few we can put ourselves in a good position to play finals.”

Dufty said he had been in regular contact with Vaughan, who was sacked by the Dragons, fined $50,000 and suspended for eight matches by the NRL for organising the barbecue.

While he didn’t know where Vaughan would play next season, Dufty said he was hopeful the former NSW and Australian prop was also headed to Belmore.

“I have just been checking on Vaugany’s welfare, to see how he is going as a friend,” Dufty said. “He is a good friend of ours and we are doing everything we can to look after him.

“I asked the question the other day just to see what he would say and he said he was working through a few things. Obviously, it would be a pretty good get for the Dogs if they could get him too.” 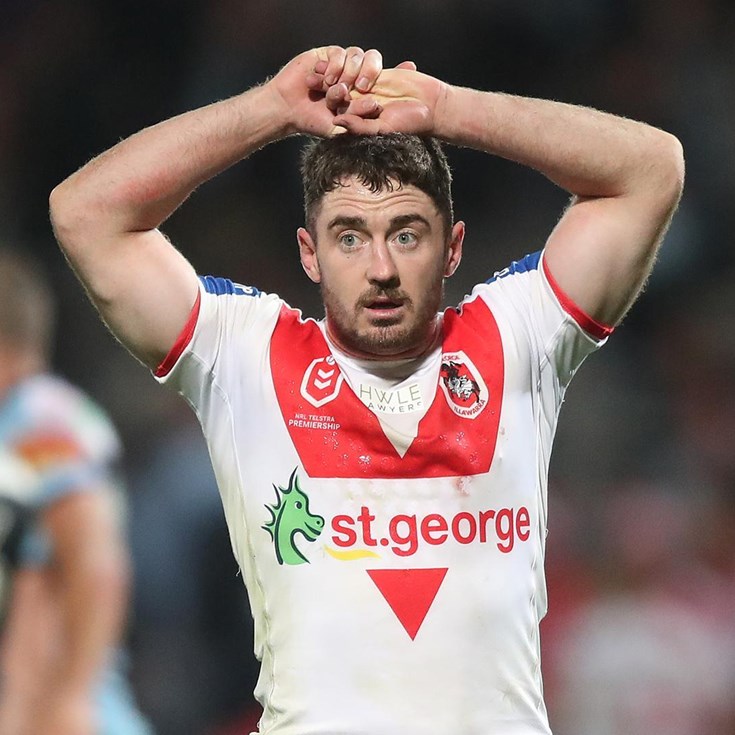