The 2020 Ken Stephen Medallist is Newcastle Knights' Connor Watson - a champion on and off the field!

Sparked by losing his 17-year-old cousin Parker to suicide, Watson, his parents Mark and Jodie and their Cultural Choice Association (CCA) have worked to make Boots for Brighter Futures a hallmark of Indigenous Round and a catalyst for important conversations in the Indigenous and broader community.

Several Youth Justice Centres were involved in creating artwork across 56 pairs of boots for various teams in 2020. The match-worn boots were auctioned online, raising $24,000 and bringing the total raised to $51,000 since inception.

On top of his club commitments, Watson was making regular fortnightly visits to Indigenous boys at the Kirinari hostel. Read more about Connors' story here.

The 2020 Ken Stephen Medal is proudly supported by My Property Consultants.

Watson was honoured in a ceremony at ANZ Stadium before the Telstra Premiership grand final on Sunday. Watch the vision here!

The Ken Stephen Medal recognises the efforts of an NRL player who has not only achieved on the field, but has committed time off the field to community projects.

A player is nominated by their NRL club for going above and beyond in their involvement in charity work, youth development or community support. The nominated player will have consistently demonstrated their commitment to making a difference in their community and be seen as a role model in this area at their NRL club.

This year will be the 32nd instance that the Ken Stephen Medal will be awarded, with a host of worthy recipients receiving this prestigious award since Wayne Pearce won the inaugural medal in 1988, including Ryan James, Joel Thompson, Jonathan Thurston and Nathan Hindmarsh.

To learn more about the 2019 Medallist, Sia Soliola, read the story.

To learn more about each of the 2020 Ken Stephen Medal nominees, read the article. 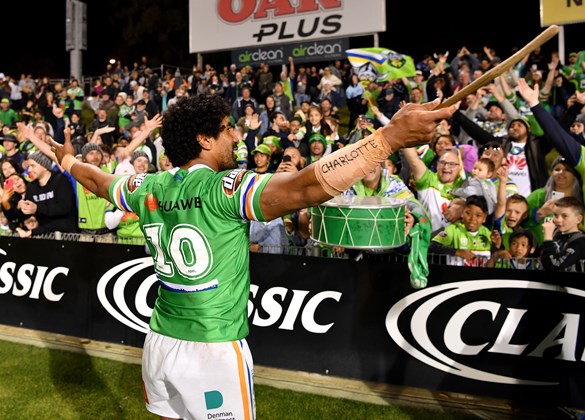 Our 2019 Ken Stephen Medallist was Canberra Raiders' Sia Soliola - a champion on and off the field! Sia is the consummate club professional in his understanding and dedication to promoting both the game of rugby league and the Canberra Raiders. He understands his role both as a club leader where he is often referred to in the media as the “spiritual leader” and someone who brings the internal values of the Raiders to life.